Forums
Discussion Forum
Forums
Why do you see so m...

Why do you see so many different depictions of Buddha?

I notice there are many different depictions of Buddha. In some of the pictures it is a thin, almost womanly figure, but in others it is a short, bald, fat man. Is this just showing Buddha at different ages in his life? Was there more than one Buddha?

Like the person said Artist depiction. There is only one Buddha (SiddhÄrtha Gautama was his real name) and he was called Buddha because it meant enlightened/awakened one.

The word "Buddha" is not a name but a title for someone who has achieved enlightenment. The founder of Buddhism, Gautama, is often referred to as the historical Buddha, or simply The Buddha. He is normally portrayed in the same way, and is easily identifiable from his large ear lobes and short curly hair.
Various forms of Buddhism also believe in other Buddhas, some of these are based upon historical figures, while some were local deities that were assimilated into Buddhism when the religion spread.
The short, bald, fat man is known as Budai, often called the Laughing Buddha. He is not the historical Buddha although westerners often confuse the two

Buddhist statuary depicts a number of figures important in Buddhist teachings. Not all of these represent the historical Buddha, Shakyamuni, who lived 2,500 years ago.
The historical Buddha is often depicted in a meditative position at the moment of his enlightenment. Here's an example:

Other Buddha statues depict various "manifestations" of the enlightened mind, such as Amitabha Buddha or Vairocana Buddha (among others). Here are examples of these:
Amitabha: These manifestations can usually be distinguished by the position of the hands.
Some Buddhist statues represent bodhisattvas, enlightened beings who have dedicated their lives to helping others attain enlightenment. Bodhisattvas often have feminine characteristics and are shown with jewelry and long hair, emblematic of their dedication to remain in the world until all beings awaken. Here are two examples:
Avalokitesvara (Guanyin): 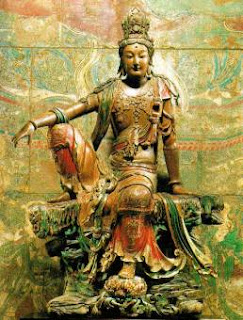 Many people confuse representations of Budai, a Chinese Buddhist monk, with the Buddha. He is sometimes called the "Laughing Buddha" because of his demeanor, but he should not be confused with the Buddha. Some people believe that he is an incarnation of Maitreya, the "future Buddha." Here's is an example of Budai:

Wikipedia has a good article on Buddhist art, if you'd like to pursue this topic:
http://en.wikipedia.org/wiki/Buddhist_art

The Meanings behind Animal Energies

Little Self vs. Spiritual Self